Before the Quisby was deemed its name, it was known as the Audubon Hotel. The Audubon first opened in 1924 where it was notorious for their trifling residents and cheap room rentals. At the time, the hotel was catered to captains, their seamen and passerbyers along the Mississippi River.

Despite many changes in ownership over the decades, the hotel’s debaucherous reputation continued to thrive throughout the city. In 1996, the hotel assumed new ownership by John Spradlin and Clinton Peltier, who renovated the hotel in hopes of bringing in a better clientele. After renovations, the new owners transformed the lobby bar into a discotheque named the Bamboo Lounge that welcomed the eclectic characters, artists and djs of New Orleans. A poster from this era showcased a freak show-esque event inviting people to show hidden talents, such as high pain tolerance, contortion or even outstanding flatulence. You could find the bar packed with residents and locals dancing. The Audubon Hotel’s Bamboo Lounge was self-proclaimed as “the sleaziest hotel on the most beautiful avenue in the world” and the stories from this era can still be heard from residents around the city, if your lucky.

After being closed for almost 14 years, the Audubon Hotel was restored and renamed the Quisby. After a year-long restoration, the Quisby finally opened its doors as a hostel with a modern design in 2017. It also stayed true to its’ origins of drawing in interesting people around the city. Through the glass of the lobby you can sometimes catch the lobby bar filled with travelers and locals still dancing to local djs on a Friday or Saturday night. 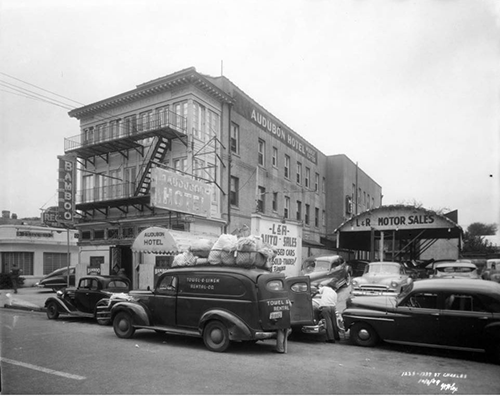 Want to save 10% off your booking?

Since we’re basically friends now.. here’s a discount code for you!

Book Now And Save

For other fun discounts, check out our Promotions page