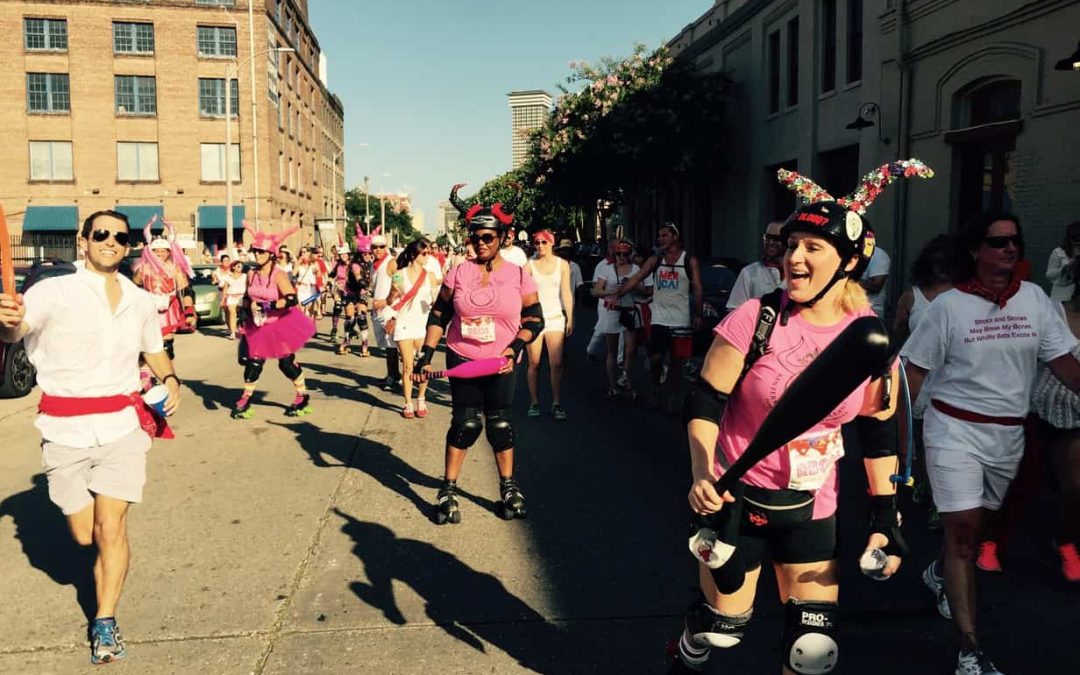 Summer is here. Put on your party pants shorts and let’s get strange. Here is a list of our five favorite summer festivals. These festivals all have two things in common: we look forward to them all year, and they’re walking distance from our front door at The Quisby. You’re welcome.

San Fermin in Nueva Orleans (aka Running of the Bulls)

What – A red wine fueled romp through the streets of the Warehouse District. Like the Pamplona affair it’s based off of, this one starts early. People start drinking at 6:30am and the running starts at 8am sharp after a blessing from El Padrino. Instead of bulls, you’ll be chased down the streets by hundreds of roller derby girls (who fly in from around the country) wearing horns on their helmets and wielding wiffle ball bats. If you’ve never been whacked by a whiffle ball bat and are wondering if that’ll hurt… it does. So mind those bulls!

Dress code is all white with red accents (bandanas, scarves, capes, or whatever you can find).

While you can run for free, this one’s for charity so we strongly encourage you to buy a ticket. Plus, your donation gets you access to La Fiesta de Pantalones (yes, the pants party) after the run. Basically a massive drunken bounce party that starts at 9am. As you might have guessed already, it’s best to drop the kids off with Grandma for this one.

Where – The run winds through the Central Business District. The afterparty is at The Sugar Mill.

How much – $40 gets you access to the after party with open bar and includes a donation to two worthy charities, one that supports women fighting Breast Cancer in New Orleans, and another that finds new homes for abused and neglected animals in the area. 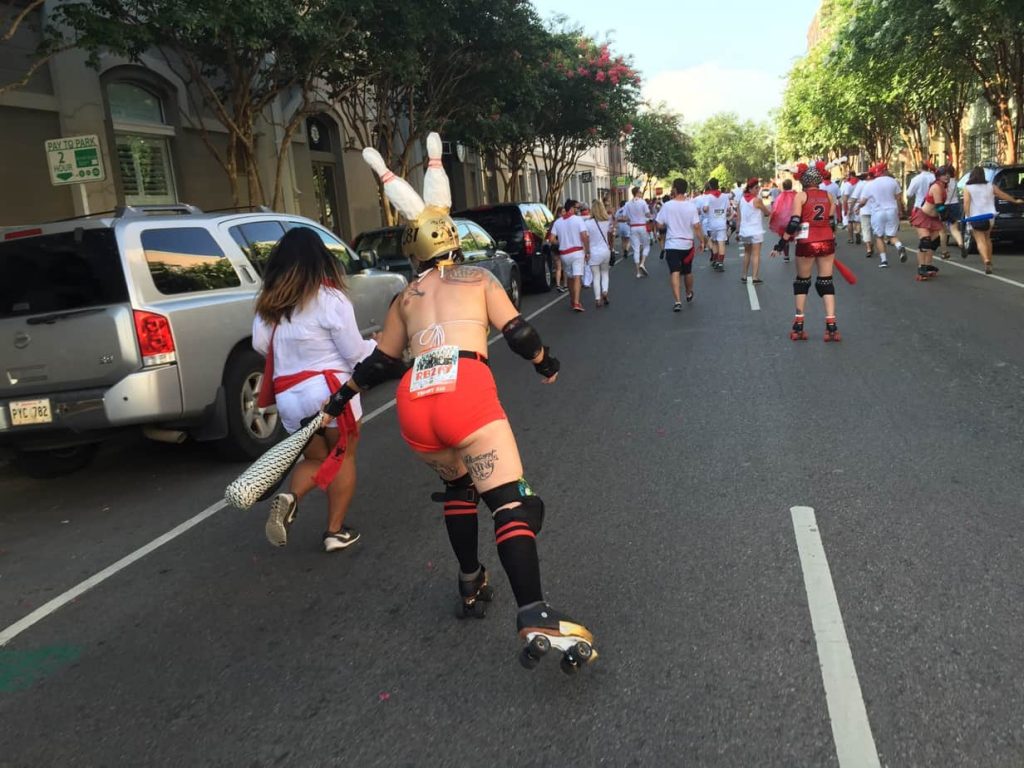 Tales of the Cocktail

What – Tales of the Cocktail is an annual convention for the spirits industry. Not technically a festival, it’s more like one week a year when the simmering centuries old love affair between New Orleans and fancy cocktails boils over into every bar in town. Those that happen to be here when it goes down are treated to a slew of famous bartenders from all over the world converging on our little town to flourish their skills for our unworthy palates.

Where – Bars, restaurants, and hotels all over the city. A full schedule of events can be found at their website.

How Much – Paid event passes are sold individually. Spending $150 or more on individual events gets you a wristband which gets you into a number of special events. But… there are also many events that are free to attend and some sponsored events even feature free drinks so really pay attention to that calendar. Especially keep an eye out for events marked “Dynamic Duo” as these are fun expert bartender showcases and usually open to the public.

This one is a little more straight laced than the others on this list but what it lacks in antics, it makes up for by showcasing sticky sweet local music from the likes of Kermit Ruffins, Brass-A-Holics, Charmain Neville, and Wendell Brunious (just a short sample, there too many noteworthy acts to name them all here).

All this goes down every August in the French Quarter as a tribute to New Orleans favorite son and global ambassador for New Orleans Jazz, Louis “Satchmo” Armstrong.

When – August 3rd – 5th, 2018. Check their website for a list of all artists and showtimes to be announced the week of June 25.

Where – Jackson Square in the heart of the French Quarter, the oldest neighborhood in America.

How Much – Admission is $5 a day. Less than the price of a drink. 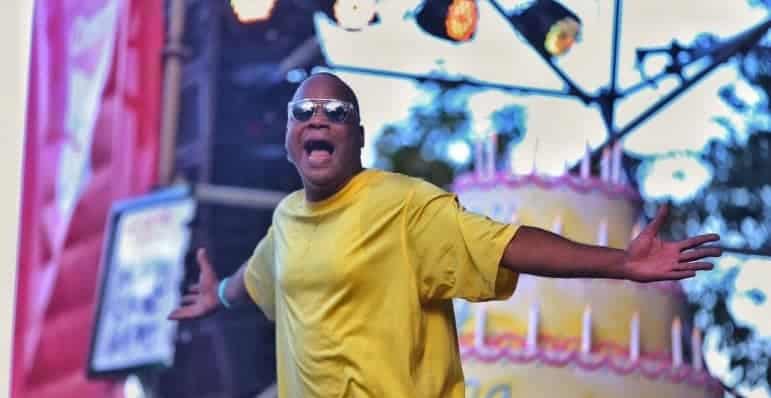 What – This one really takes the ridiculousness to the next level. Started by a bunch of misfits to have a little fun at the expense of the real Mardi Gras, it’s evolved into something bigger. For one day every summer, we can pretend it’s February and the rules of polite society don’t apply. And it’s in August so you can expect even less clothes than regular Mardi Gras (which is already not much).

The walking parade (or a few hundred people in elaborate costumes pretending to be an organized thing) starts on Oak Street and heads to Palmer Park. There it turns into a temporary rave for a couple of hours then coalesces again and heads back to Oak Street for a street party that goes late into the night.

This is the most NOLA of all the events on this list because it truly could not happen anywhere but here. Like Running of the bulls above, this one is better enjoyed without the kiddies in tow.

Where – Starts on Oak Street, meanders to Palmer Park, stumbles back to Oak Street 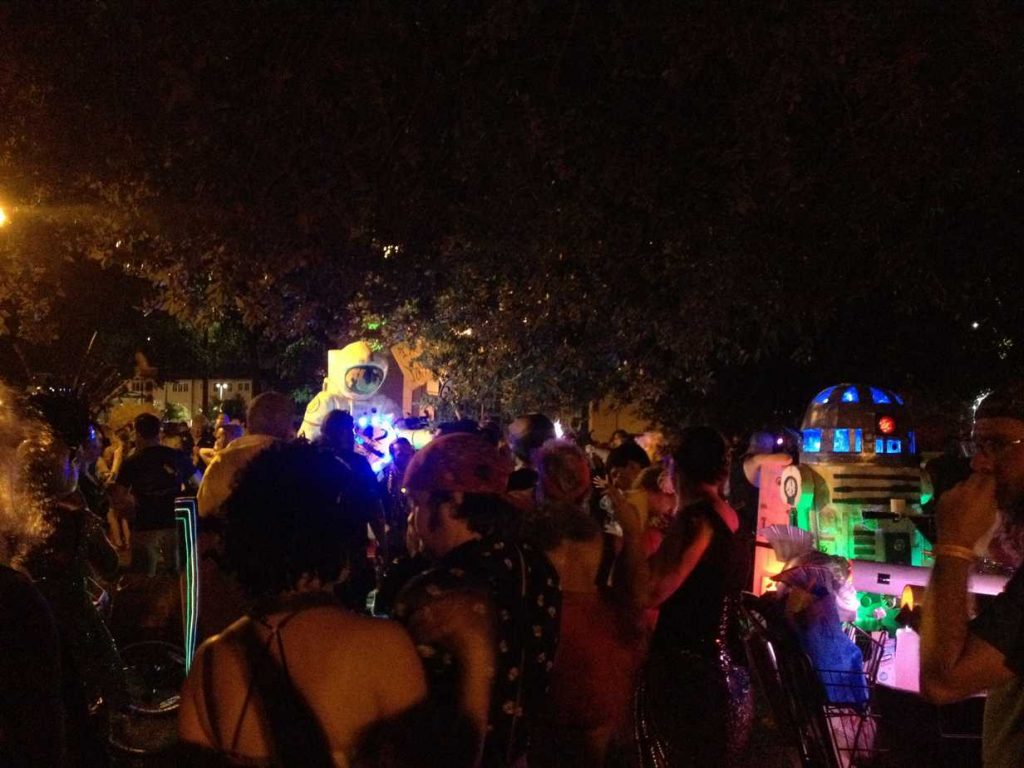 What – Known as the “Gay Mardi Gras”, the Southern Decadence Festival is one of the wildest festivals that calls NOLA home. Attendance in 2016 broke all records, with over 180,000 gay, lesbian, bisexual and transgender partiers descending on the city.

A six-day event, it kicks off the Wednesday before Labor Day Weekend and usually doesn’t peter out completely until the following Tuesday. Southern Decadence started in 1972 as a going-away party among friends and has now evolved into a something people spend all year looking forward to.

Where – This one centers around the part of the French Quarter lovingly called the gayborhood but bars, restaurants, and clubs all over the city get in on the fun too. There is usually a free outdoor concert on Bourbon Street on the Saturday of Decadence known as The Bourbon Street Extravaganza. The main event, a parade on Sunday is led by the Grand Marshal and is a spectacle of color, feathers, and leather.

How Much – Mostly free although some bars and clubs will have cover charges in place. 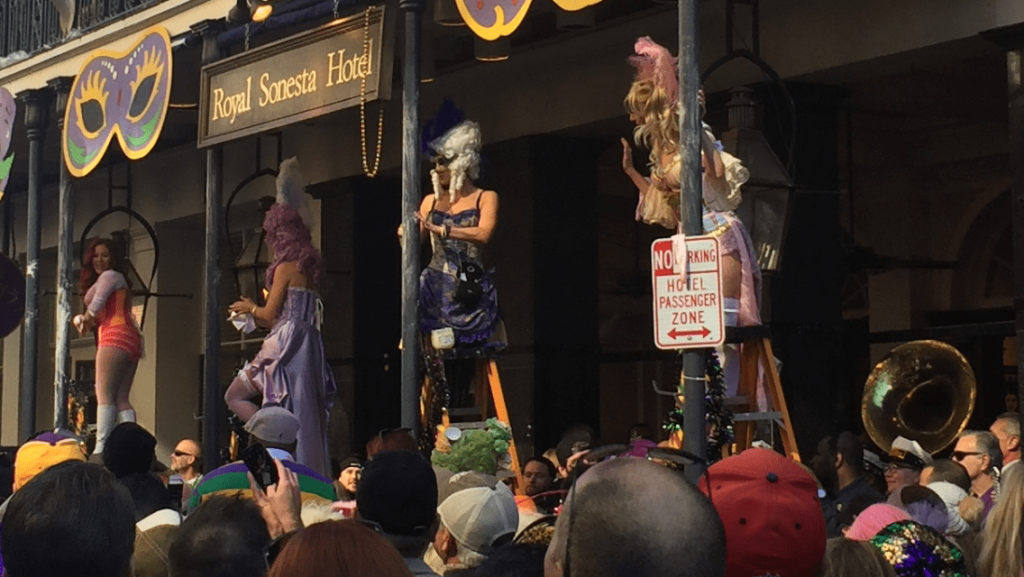